A LIGHT IN THE WILDERNESS 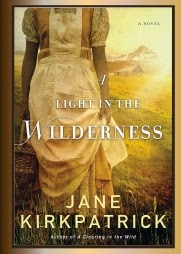 Letitia holds nothing more dear than the papers that prove she is no longer a slave. They may not cause white folks to treat her like a human being, but at least they show she is free.


She trusts in those words she cannot read--as she is beginning to trust in Davey Carson, an Irish immigrant cattleman who wants her to come west with him.

Nancy Hawkins is loathe to leave her settled life for the treacherous journey by wagon train, but she is so deeply in love with her husband that she knows she will follow him anywhere--even when the trek exacts a terrible cost.

Betsy is a Kalapuya Indian, the last remnant of a once proud tribe in the Willamette Valley in Oregon territory. She spends her time trying to impart the wisdom and ways of her people to her grandson. But she will soon have another person to care for.

As season turns to season, suspicion turns to friendship, and fear turns to courage, three spirited women will discover what it means to be truly free in a land that makes promises it cannot fulfill. This multilayered story from bestselling author Jane Kirkpatrick will grip readers' hearts and minds as they travel with Letitia on the dusty and dangerous Oregon trail into the boundless American West.

Jane Kirkpatrick is a phenomenal writer to pen such fiction from truth into a beautiful work of art.  This “truth is stranger than fiction” novel takes place during the 1800’s, following a harrowing wagon train venture from Missouri to Oregon.  A personal note here – I am well acquainted with the areas of Oregon Ms. Kirkpatrick wrote about, which brought visual enjoyment during my reading. Letitia is a strong black woman, full of wisdom and dreams.  Her dream of freedom from the buckles of slavery is ongoing, even though she received her papers of freedom in Kentucky.  Frankly, prejudice against the color of one’s skin is abhorrent to me – I’ve never understood slavery.  Letitia will not be stopped!  The reader will discover immediately that this courageous young woman turns the other cheek to adversity and faces life with everything within her.

Recently, I read in an interview with Jane Kirkpatrick that the wedding scene between Letitia (Tish) and Davey Carson, an Irish immigrant, had to be discreet and meaningful considering they were breaking the law.  The wedding was sweet and joyful, even a bit of humorous relief when a Jewish peddler happened upon the scene, including stomping on the glass as is done in Jewish weddings.  This is one of my favorite scenes.  Davey was kind to Tish, although he was of a male mind of that time period.  Soon after, a thorn begins in Tish’s side when Davey’s grown son appears in the picture, jealous, hateful, and prejudiced.  He does not stick around long when he decides to take another route to Oregon.  Another constant thorn in her side is Greenberry Smith, mean spirited and murderous, intent on making Tish’s life miserable.  Tish wants Davey to draw up a paper willing his property to her and her children should he become deceased.  He is reluctant because he does not know how to read and write, a fact he keeps to himself.  He finally comes up with something that appeases Tish for the time being.

Among the characters is the dearly loved milking cow Charity that Tish owns, in whom she can safely confide, and does so many times.  Tish is pregnant when the trek to Oregon begins. She is mid-wife to many, but alone when her baby daughter Martha is born.  The children love her as she entertains them with great stories.  Her closest friend is Nancy Hawkins, a quilter who treasures the loom made for her by her husband.  The determination and inner strength of the women on the wagon train amazes me…I can scarcely comprehend their depth.

It is difficult to be succinct about this beautiful story.  One of the impractical events that occurred was when Davey inadvertently lost Tish’s freedom papers and his document.  Tish had hidden them in a flour barrel that Davey exchanged for a full barrel.  But Tish was to find out within time that the document Davey made up was of no value – which she felt a betrayal on his part.

Finally, Tish made it to Oregon City alone.  Davey met her there after helping with other matters regarding the wagon train.  Davey did not stay around much, as he got gold rush fever and headed to California several times.  Settling in Oregon reveals much more – Tish found joy in meeting a Kalapuya Indian woman named Betsy and her grandson.  Davey and Tish had a baby son, Adam born around 1853.  Davey, Jr. enters the picture again in Oregon, causing her frustration.  Hardship is a daily word, but Letitia’s trust and faith in God were chiefly imperative to getting through each day.  Letitia’s valor brought her through a lawsuit with a white man over her property.  She was known as one of the first free black slaves to enter Oregon.  I enjoyed Ms. Kirkpatrick’s novel because of the history and culture of the 1800’s.  This free child of God is definitely the Light in the Wilderness.

Thank you to Revell for providing a copy of this book in exchange for my honest review.

A VIDEO FOR A LIGHT IN THE WILDERNESS 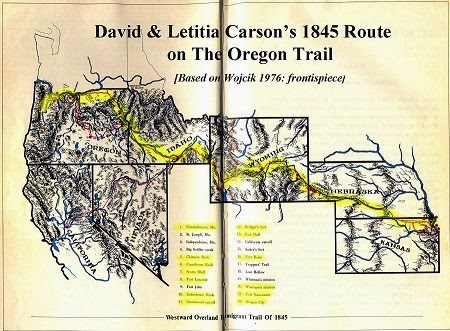 This is the first book I've written with much of the research completed before the story was brought to me. Thirty years previous, two former Oregon state university students Janet Meranda and Dr Bob Zybach discovered the court records and never forgot Letitia's story. They brought it to me believing a novel would tell it best. Their research and progress on a nonfiction book about her and Davey's life can be followed at Friends of Letitia Carson.

Birth Year : 1814
Death Year : 1888
Letitia Carson was a free African American woman who was born in Kentucky. She was one of the early African Americans to be listed in the U.S. Federal Census as living in Oregon.
Letitia's husband was an Irishman named David Carson (1800-1854). The pioneering couple and their two children lived in Benton, Oregon Territory, according to the 1850 U.S. Federal Census. The couple had come to Oregon in 1845, and their daughter Martha was born along the way, their son Adam around 1853.
When David Carson died, Letitia and her children were left out of his estate settlement, and Letitia filed suit against the estate for her children's benefit. She won the lawsuit and settled on land she had purchased near South Myrtle Creek,today known as Letitia Creek. She is buried near her property now on private land.
Letitia Carson was a well known mid-wife in the county. The Letitia Carson Pioneer Apple Tree was named in her honor; it is thought that Letitia planted the tree, and researchers named the tree while completing a cultural resource inventory of the property owned by Oregon State University.

"Letitia's story of one of the first black women to cross the Oregon Trail in 1845, give birth along the way, and have a Missouri man impact her life here in Oregon after the death of her common law white husband is a compelling story of courage and commitment . . .How could I not pursue that story?" Jane Kirkpatrick

Jane Kirkpatrick is a writer, speaker, teacher...
Jane is inter-nationally recognized for her lively presentations and well-researched stories that encourage and inspire.  Her works have appeared in more than 50 publications including  Decision, Private Pilot and Daily Guideposts.  Jane is the author of over 25 books including historical novels. Many of her titles are based on the lives of real people or incidents set authentically in the American West.  Her first novel, A Sweetness to the Soul, won the coveted Wrangler Award from the Western Heritage Center.  Her works have been finalists for the Christy, Spur, Oregon Book Award, WILLA Literary Award and Reader’s Choice awards.  Several of her titles have been Book of the Month and Literary Guild selections.  Follow this link to see other awards that Jane has won.

Early Years
Jane grew up near Mondovi, Wisconsin, a little town not far from the Mississippi River. Her older sister Judy (now deceased) and younger brother Craig helped on the family dairy farm. Dozens of cousins lived within 50 miles providing the privilege of extended family memories. Most of the "Rutschow" clan remained in the Wisconsin-Minnesota area. Jane moved to Oregon in 1974 after completing her master's degree in social work at the University of Wisconsin-Milwaukee. She worked in the disabilities field and became the director of the mental health program in Deschutes County and the first female president of the Oregon Community Mental Health Director's Association.

Homesteading & Family
Eventually, Jane "retired" to homestead and begin a new adventure in writing, working on the Warm Springs Indian reservation, growing watermelons, and attempting to grow grapes, alfalfa and cattle. The Kirkpatrick's new life included "clearing sagebrush and wrestling wind and rattlesnakes" while "homesteading" land on the John Day River in a remote part of Oregon known locally as Starvation Point.  "It was our 'rural 7-Eleven' since our home sat seven miles from the mailbox and eleven miles from the pavement" notes the author. Additionally, she worked for seventeen years as a mental health and educational consultant on the Warm Springs Indian Reservation in Central Oregon with both Native American and non-Indian communities, a position she left in 2002.  Jane has two step-children.  Kathleen lives in Florida with her family and youngest granddaughter, Madison.  Matt lives in Wasco and works on the ranch full time when not looking after his family including his and Melissa's daughter, Mariah.
In the fall of 2010, after twenty-six years on the homestead, Jane and Jerry, her husband of 35 years, made another life change moving back to Central Oregon near Bend. "There is a season for everything," Jane notes.  Their seasons on the ranch changed their lives and they leave with no regrets looking forward to new adventures in writing and life.

Speaker & Philosophy
A lively and humorous speaker, Kirkpatrick is a frequent keynote presenter for conferences, women's retreats,fund-raisers and workshops.  In addition to her historical fiction which dramatizes pioneer life, Homestead relates, with love and laughter, her own family's modern-day struggle to catch a dream in the Oregon Territory.
Jane believes that our lives are the stories that others read first and she encourages groups to discover the power of their own stories to divinely heal and transform. Visit her blog for more information about her current projects and the privilege of following one's passion wherever the dreams may lead.
Posted by Unknown at 11:36 PM