MY REVIEW
ON
SPRINGTIME IN SAVANNAH
BY
GAIL WARNER

It seemed a normal spring morning in Savannah until Jonathan Rayburn heard an angelic voice on Monterey Square. Within moments of setting eyes upon the exceptionally beautiful Keri McGuire, he welcomed her to his beloved city and into his heart. In the days ahead, his faith is severely tested because of one homeless man and a civil lawsuit. Daniel Stanton, a busy attorney in St. Augustine, arrived at Mrs. Quinn’s home, questioning why his father’s client has requested his legal advice. One portrait upstairs caught his attention; one nearly identical portrait in the music room captured his wishful thoughts. Never in his life had he been so disappointed when he actually met the granddaughter from Milwaukee. While Laura Martin challenged his ethics, he prayed to be a man of conviction.

It was a surprise to me that more reviews hadn’t been written on this beautifully composed story about Springtime in Savannah by Gail Warner.  Truly, this story does not stand alone – but of several stories skillfully intertwined to keep the reader drawn in.  Each story has the possibility of being complete as one – but to include so many well defined characters, each with different personalities and problems, was done with proficient cleverness by Ms. Warner.

The author went deep into research on the history of Savannah, as well as interesting facts that I would never have known without reading this novel.  At times, I felt I was reading a travelogue which made the scenery in my mind vivid through the color of illustrious scripting.  The story is lengthy – and never boring.

What can I say about this story that wouldn’t add spoilers to future readers?  My heart was warmed by the conversions to faith in Jesus.  Some of the characters were idiosyncratic and unlikeable.  I fell in love with those characters that were fun in spite of themselves.  My compassion lay with the emotionally and physically abused with admiration for their passion to change their lives through Christ.  The love interests were enthralling and romantic.  Budding romance was proven unpredictable in the length of time and adversities the couples faced.  I sensed this author was emotionally involved with her characters, as I also felt.  Her characters and situations were so real that I found myself praying for those in the story that continued to sin and live evilly.  It felt silly to pray – Gail had already decided their outcome!  Will there be hope for these individuals in Gail’s story?  You’ll be amazed as you watch God working in the lives of all under the pen of Gail Warner.

Ms Warner shows herself a person of deep faith in God; in tune with reality of our world today and historically, and that she is intelligent and capable of sculpting words with such an inspiring touch.  Gail is an accomplished author that I will follow and look forward to her future publications.  Whew, I got through this review without spoilers….so if you want to meet the characters, learn the answers, take a guided tour of Savannah – history included -  you’ll need to get you own copy!

Gail Warner's parents joined the family of God five years before she was born, and they faithfully attended a large rural Nazarene Church named Richfield, near Flint, Michigan. For thirty-five years, Gail's varied roles as a minister's wife brought her great fulfillment and opportunities to witness for Christ. With fond memories, she recalls the years in a parsonage setting, where she and her husband, Richard, raised three outstanding daughters. Gail finds joy in traveling with their family, singing in a quartet, working in her flower garden, participating in Beth Moore Bible studies, and connecting with friends on Facebook. Though she is a five-time cancer survivor, she thanks God for giving her good health. Gail lives with her husband in Illinois, but because of Eugenia Price's novels, she has a love for historical places. 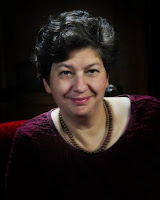 MY REVIEW
ON OLIVIA NEWPORT'S
"THE INVENTION OF SARAH CUMMINGS"

Sarah Cummings has one goal in life--to break into Chicago's high society. Desperate to stop serving dinner and to start eating at society tables, Sarah alters cast-off gowns from the wealthy Banning women to create lustrous, flattering dresses of her own. On a whim at a chance meeting, she presents herself as Serena Cuthbert, weaving a fictitious past to go with her fictitious name. But as she gets closer to Simon Tewell, the director of St. Andrew's Orphanage, Sarah finds that she must choose between the life she has and the life she dreams of. Will she sacrifice love to continue her pretense? Or can Simon show her that sometimes you don't have to pretend for dreams to come true? Olivia Newport brings us back to Prairie Avenue to explore the place where class, social expectations, and romance come together. Readers will enjoy following the intrepid Sarah as she searches for true love in a world of illusions.

Feeling somewhat at a loss having not read the first two books in this series, I nevertheless enjoyed The Invention of Sarah Cummings as a standalone story.  Olivia Newport was unfamiliar to me as an author and I presently regard her highly as a fine writer and am excited to read her future works.  The time period of late 1800’s is a favorite of mine in this historical genre.

It was difficult at times not to be a tad judgmental of Sarah’s choices; but learning her background definitely gave me more understanding and compassion toward her as an individual.  She was impetuous, to say the least and at first, quite unlikeable.  Without that compelling characteristic, the story wouldn’t have taken hold of my interest as it did.  Ms Newport’s story is rich in history around the 1800’s time frame, including the political tensions on all sides of the presidential election between William McKinley vs. William Jennings Bryan.  The author obviously is a deep researcher into historical facts which lends completely in writing truth into fiction – a very admirable quality.

Chicago high society in that day is snobbish and discriminating – developing a wide gap in expected behavior between the rich and the poor, particularly those in service to the “polite society.”  Sarah Cummings became an orphan in her early teens through a tragic loss of both parents.  Without anyone to take guardianship over her, she was placed in St Andrews Orphanage, where she met Simon Tewell, the director of St Andrews who had a secret affinity for Sarah.  Sarah had no faith in a God that would allow such misfortune and unhappiness in her life.  She was empty and developed some vindictive conniving habits that she felt deservedly would take her where she wanted to go.  A chance meeting in a hat shop with a young lady of culture, Lillie Wagner was the beginning of Sarah Cummings new identity as Serena Cuthbert with an impressive new history of living the life of wealthy infamy.  Lillie and Serena became instant and fast friends.

So – here we go, hold onto your hat!  Lillie takes Serena in hand and introduces her to the society of Chicago and Prairie Avenue, where coincidently Sarah was in service as a maid to the Banning family.  Sarah, talented with a needle and thread and could fashion her own clothing from hand-me-downs with an aura perceived as high fashion readily disguising her as the wealthy young woman of good grace named Serena Cuthbert.  Story tension builds when Serena meets Bradley Townsend and targets him as husband material.  Bradley is involved in the political scene with a life of his own that caused the infrequent dates that was frustrating to Serena.

Serena exploited others unwisely in her endeavors to exist in her disguise.  Serena’s antics at being in two places at once, her deceptions, her unique contriving  routes of travel, and lies was dizzying.  I felt I needed to keep a score card going page after page of Sarah’s demise as Serena could head for a downfall at any time.  In my mind, I fathomed Ms Newport still held a few surprising shocks ahead, which kept me involved.  Would waiting for Serena and Sarah to meet the real Creator be fulfilled?  Candidly, there is nothing further I can share with you about this finely structured tale without ruining your own joy in reading Sarah/Serena’s story.   Olivia Newport has written a story of what can happen to anyone without proper respect and value for God’s love, grace and tender mercies.  Great lessons can be learned from this worthwhile and imaginative writing skill of Ms Olivia Newport’s Invention of Sarah Cummings.

Olivia Newport is the author of The Pursuit of Lucy Banning and The Dilemma of Charlotte Farrow. Her husband and two twentysomething children provide welcome distraction from the people stomping through her head on their way into her books. She chases joy in stunning Colorado at the foot of the Rockies, where daylilies grow as tall as she is. Olivia Newport's novels twist through time to find where faith and passions meet.

Find out more at http://www.olivianewport.com/
Like her page at https://www.facebook.com/OliviaNewport

Available August 2013 at your favorite bookseller from Revell, a division of Baker Publishing Group.

I received this book through Revell's Blogger Tour, and was not required to give a positive review.

Posted by Unknown at 3:24 PM No comments: