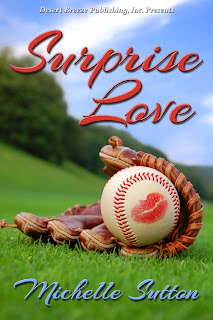 Bryan Miller's dream is to become a professional baseball player. At least that’s what he's always believed. Then this stunning woman enters his world and he's instantly smitten. But she dares to shake his foundation by asking if playing pro ball is his dream, or his parents’ dream for his life. Who does she think she is to question his future plans? Sure, he has always enjoyed solving math equations and teaching people more than playing sports. Of course he wants to play pro ball, doesn't he? Suddenly he’s not so sure anymore. Kami Garrett traveled the country with a women’s professional rodeo circuit before a serious injury two years ago took her out of the arena. Now if she stays in Arizona for the rest of her life, that will be fine by her. She’s content to teach riding lessons. She adores baseball, but refuses to hook up with a pro ball player. Then this amazing man comes to Surprise for Spring Training and she's torn. Are they meant to be together, or are their different goals in life destined to keep them apart?

Kami’s first impression of Bryan as she watched him hit a home run showing off with a cocky strut around the bases was that he looked like Ashton Kutcher, her favorite actor crush. Her cousin Mindy, who was a bit nervy and ornery, decided she would introduce Kami to Bryan just for fun. And…she did, much to Kami’s embarrassment!  Bryan’s best friend Will, another ball player, stepped into the conversation and Mindy immediately began to flirt with him causing Kami much consternation about this entire developing situation.  Bryan and Will were attending spring training for the Texas Rangers in Surprise, Arizona hoping to be picked for the team.

Backtracking a bit – Kami was still recovering emotionally from a tragic accident that happened while she was performing on her horse during a rodeo. The bones had healed physically, but she felt responsible for the death of her father. She had insisted he be there for her performance that day, which became doubly horrific for her because he was killed when his airplane crashed on the way there.  Considering herself now orphaned, her mother had passed away earlier; the only family she had left was Uncle Jay and Mindy. The cousins lived together in a trailer near their Uncle Jay on his ranch.

Each character Michelle Sutton wrote into this story has problems of their own.  The story isn’t all moonlight and roses in the romance section, particularly for cousin Mindy who suffers from a bipolar condition for which she will not take her meds; and is promiscuous without guilt.   Kami worries that Mindy’s attitude could be a serious deterrent to Bryan’s developing affections for her.  Kami suffers from PTSD over being sexually attacked when she was sixteen combined with guilt over her father’s death and self esteem issues.   Kami’s dad had been a professional ballplayer, which caused bad memories from a lonely childhood and wasn’t sure about her relationship with Bryan.  Bryan feels oppressed by his father’s demanding control that he be a professional ball player.

Michelle’s ability to build a well crafted story with surprises and a few shocks is highly impressive.  She pulls off realistic characters with qualities and faults that keep the reader focused on several stories at one time.  Ms Sutton is blessed with writing integrity and good Christian morals that glorify the Lord and mix a good flavor for reading.

Personally, not much of a baseball fan myself, the annual rodeo was always a big event in my hometown.  There were many emotions in the story to which I can easily relate and feel compassion toward.  Surprise Love is a definite interesting read and Michelle Sutton has hit another home run!

Michelle is a social worker who has been writing romantic fiction with an inspirational message for over nine years. Southeastern Arizona is where Michelle calls home. She loves being surrounded by mountains and fresh air, which inspires many of her novels. She and her husband are approaching twenty-two years of marriage and their two sons will begin their third year of college in August. She is the author of a dozen novels in print and is a member of American Christian Fiction Writers, as well as an avid book reviewer and blogger on a variety of sites. She founded Edgy Christian Fiction Lovers social networking site which has well over 1000 members. Crafting new stories and reading/reviewing great books is her idea of a fun time.